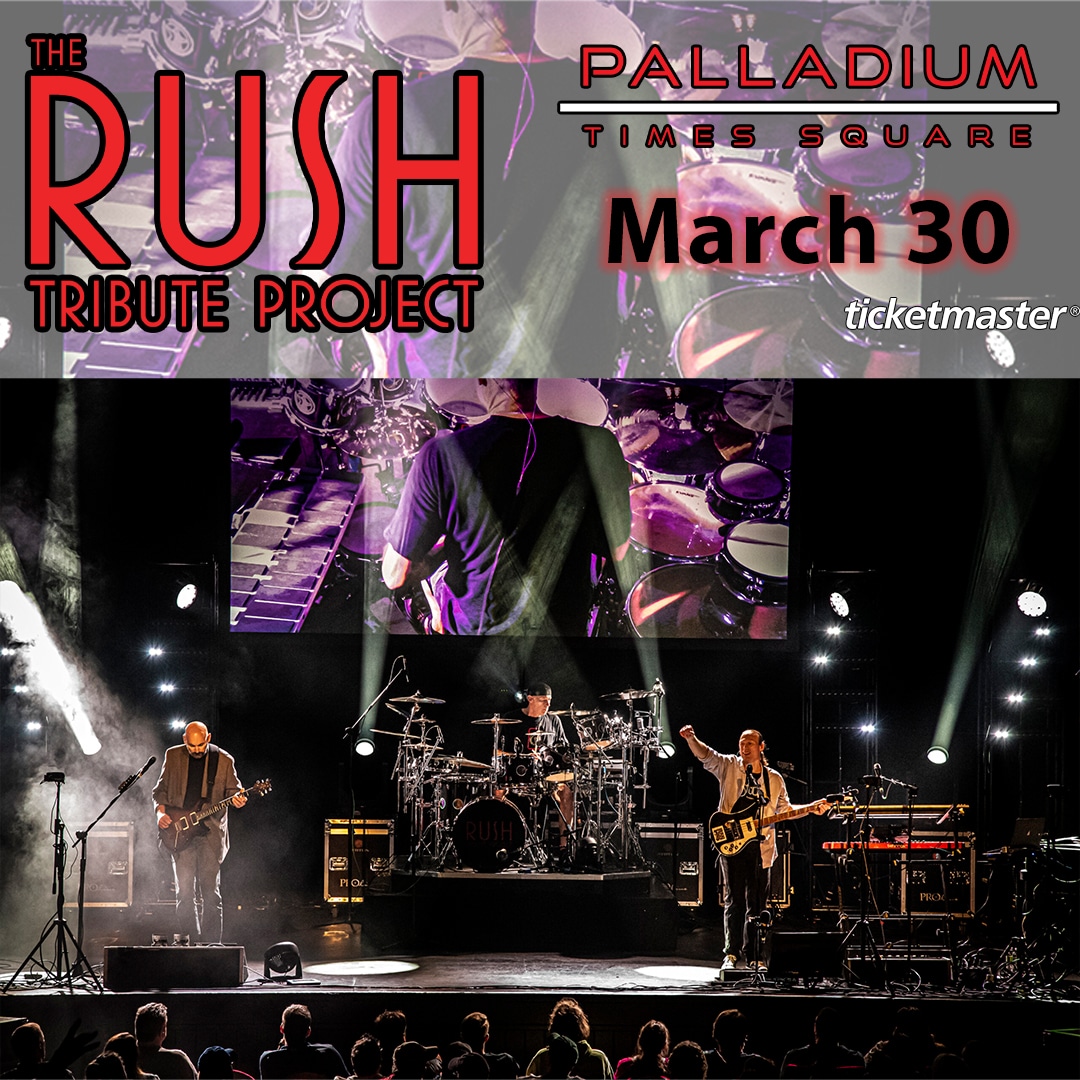 The Rush Tribute Project will be at Palladium Times Square, on March 30th, 2023.

Tickets are on sale now!

The RUSH Tribute Project is an homage to one of the most enduring and influential bands in rock music.

Combining skilled musicianship with exciting performances, The RUSH Tribute Project (known as RTP to its dedicated fanbase) delivers the magic of Rush’s famous live concerts. Covering all 40-plus years of Rush’s amazing career, RTP painstakingly recreates the sound and energy that made Rush one of the top-selling rock bands of all time. With a lineup that has performed Rush tribute shows for over a decade across North America and around the world, including RushCon, RTP stands out as one of the premiere tributes to this legendary, RnR HOF power-trio.

SEAN JONES is a classically trained multi-instrumentalist, which comes in handy when needing to cover Geddy Lee. He has played nationally and internationally in various Rush tributes over the past 20 years, including playing for RushCon and touring army bases in Kuwait. Along with Geddy, some of Sean’s biggest bass influences include Chris Squire and John Entwistle, all of whom incorporated keyboards, synth pedals, guitars, and other instruments into their performances.

BILL HECK is a 37-year veteran of guitar and has been playing at some level since childhood. Bill was the proud recipient of the Wisconsin Area Music Industry (WAMI) Award for best guitarist in 2017. He has always been heavily influenced by guitar-hero rock, hard rock, and metal, but always considered Rush and Alex Lifeson as the primary force behind his love for guitar playing. Bill could be considered the “new guy” in The Rush Tribute Project as he had to go through the heavy scrutiny of auditioning for the band but has happily been a member of RTP since its beginnings over eight years ago.

THOMAS SLAWNIK is the percussionist and has been with RTP since its start in 2013. Thomas started banging the drums at the young age of 4 and hasn’t stopped since. He has performed with several Milwaukee bands since the late ’70s. Thomas’ influences include Neil Peart and Scott Rockenfield. His current drum kit is a “Frankenstein” collection of drums and cymbals which include DW drums, Zildjian and Sabian cymbals, and various electronics. The kit is influenced by Rush’s R30 tour kit. When he’s not on tour, Thomas spends his free time with his daughter, Ina, and enjoys golf, bike rides, and a good IPA.

PABST THEATER GROUP
“An incredible recreation of the RUSH live experience [with] an incredibly loyal fanbase. It’s always a pleasure working with a band as good as The Rush Tribute Project. Highly recommended!”

As of March 7th, 2022, New York City no longer requires theaters to check guests’ vaccine status for entry into the venue. Wearing a mask is highly encouraged but not required.
16+ Unless Accompanied by a Guardian
Small bags or purses are limited to 9" x 9" x 5" size (any bag deemed too large may be coat checked by our security upon entry and can be retrieved from coat check after the show).
Once a patron has their ticket scanned and has entered the venue, if they exit, they will not be allowed back in to the venue. All exits are final.